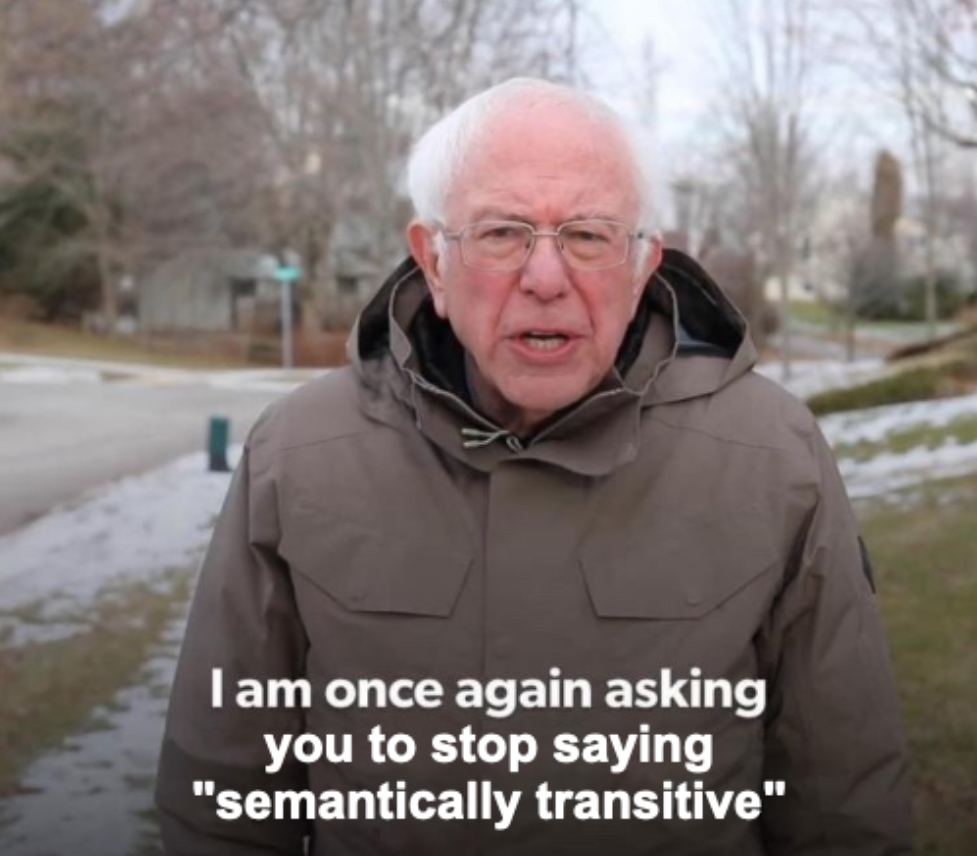 Raise your hand if you’ve ever done (or been tempted to do) any of the following as part of any scientific discussion of natural language:[1]Without even checking, I am fairly certain that I belong among the hand-raisers, btw.

The terminological choices we make matter. They carry with them a whole host of assumptions about modularity, division of labor, and the structure of our theory of the human capacity for natural language. And, consequently, there are terms whose use entrenches discredited ideas about how language works, reinforcing false beliefs about the very thing that is the object of our study. I cannot tell you how much energy I spend unteaching my students some of this stuff. To then give them readings from the (recent!) primary literature where these things are nevertheless prevalent is… disheartening.

Let’s start with something that’s hopefully straightforward and uncontroversial: “semantically (in)transitive.” Seriously, what the fuck. “Transitive” and “intransitive” are morphosyntactic notions; this juxtaposition therefore makes about as much sense as “acoustically purple.” (We are driven to interpret the latter as a metaphor precisely because it makes no literal sense.) What you’re looking for is probably “dyadic” and “monadic,” respectively. Or at least I hope so; if not, then I really have no earthly idea what you’re trying to say.

Using terms like “semantically (in)transitive” invites the inference that there is some kind of systematic relationship between morphosyntactic transitivity and semantic valence, a claim we know is false. Here’s some really exotic data from an understudied language exemplifying a perfectly transitive sentence whose main predicate is perfectly monadic:

(If you are tempted to wave away data like this as “idiomatic,” you are playing something of a trick on yourself. “Idiomatic” suggests some sort of departure from the normal mode of syntax-semantic mapping. But there are many languages, e.g. Farsi, where cases like (1) – so-called “light-verb constructions” – are absolutely the norm. And since Farsi is a natural language, it suffices to undermine the idea that morphosyntactic transitivity and semantic dyadicity stand in the relevant kind of systematic relationship.)

Next, let’s examine the notion of “subject.” There is a tradition in philosophy of understanding “subject” as “the thing to which a predicate applies.” But “predicate,” as the data above helpfully demonstrate, is a wholly semantic notion, not guaranteed to align with anything particular in the syntax.

And indeed, we have independent evidence that “subject” in the linguistic sense is not reliably mapped to anything semantic. As we have known since at least Sigurdsson’s work in the 80s and 90s, Icelandic differs from English in terms of which noun phrase it promotes to subject position and, crucially, the difference can only be described morphosyntactically. So, for example, in a sentence with the general structure in (2), English would promote the downstairs nominative DP to the matrix subject position, while Icelandic would promote the matrix dative DP to the matrix subject position:

The difference between Icelandic and English is that Icelandic can promote DPs within any case marking to subject position (and thus, the operative criterion for attracting a subject is “closest DP”), whereas English can promote only nominative DPs to that position (thus, “closest nominative”). Crucially, things like “nominative” are fully dissociable from any semantic primitive (cf. nominatives in passive, accusatives in raising-to-object, etc.), and therefore, the definition of “subject” in semantic terms is wholly intractable.

I won’t belabor the “word” issue here, but instead just refer the reader to Marantz’s excellent 2000/2001 treatise on the topic.

To wrap up this brief ranty-rant…:

The terms we use matter. Using obfuscating terminology – or worse, terminology that explicitly invites an inference that is false – actively works against the kind of clarity that is, or should be, the goal of any serious investigation of human language. I spend lots of energy in my classes to unteach these folk-scientific notions about, e.g., “predicate” and how it may or may not relate to the syntax of natural language. Using more accurate terminology would help reinforce these hard-won lessons of modern linguistics.

Some thoughts on the recent kerfuffle over on linguistics twitter (posted: Oct 28, 2021)

We could all use some terminological hygiene (posted: Oct 27, 2021)