A while ago, I posted the following on facebook:

To illustrate what I had in mind, compare the following two claims – which, as far as I can tell, are extensionally equivalent:

Since writing that facebook post, people have occasionally been pointing me to various attempts at arguments in favor of null expletives, i.e., arguments that the equivalence above does not hold. In this post, I’d like to discuss one such argument and why, in my opinion, it doesn’t work.

The argument comes from Sheehan’s 2010 “‘Free’ inversion in Romance and the Null Subject Parameter” (see also Sheehan 2016, “Subjects, null subjects, and expletives”). [Ed. note: Michelle Sheehan informs me that she herself no longer believes in the account I’m addressing in this post, either, and her newer thoughts on the matter – apparently, without recourse to null expletives! – can be found here: https://ling.auf.net/lingbuzz/004063.] The argument hinges on the Definiteness Effect arising in a particular set of environments in certain Romance languages (Spanish, Italian, and European Portuguese). The environments in question are VS word orders where V is unaccusative and an overt locative PP follows the subject. Here is a demonstration of the effect from European Portuguese (p. 242):

Why must one go to these V‑S‑PP word orders to see the effect? Because, as Sheehan notes, the languages in question have Locative Inversion. And in Locative Inversion, there is no Definiteness Effect associated with the post-verbal subject (I’m demonstrating here with English, but the facts are the same in Romance):

If null subject languages allow a null locative, then VS orders without an overt locative will be ambiguous between, on the one hand, run-of-the-mill VS, and, on the other hand, Locative Inversion (viz. PP‑V‑S) in which the locative just happens to be null. Thus, because these VS sentences have at least one parse (the Locative Inversion one) in which no Definiteness Effect is expected, they indeed do not give rise to the effect (pp. 239–240; see also Pinto 1997, “Licensing and interpretation of inverted subjects in Italian”): 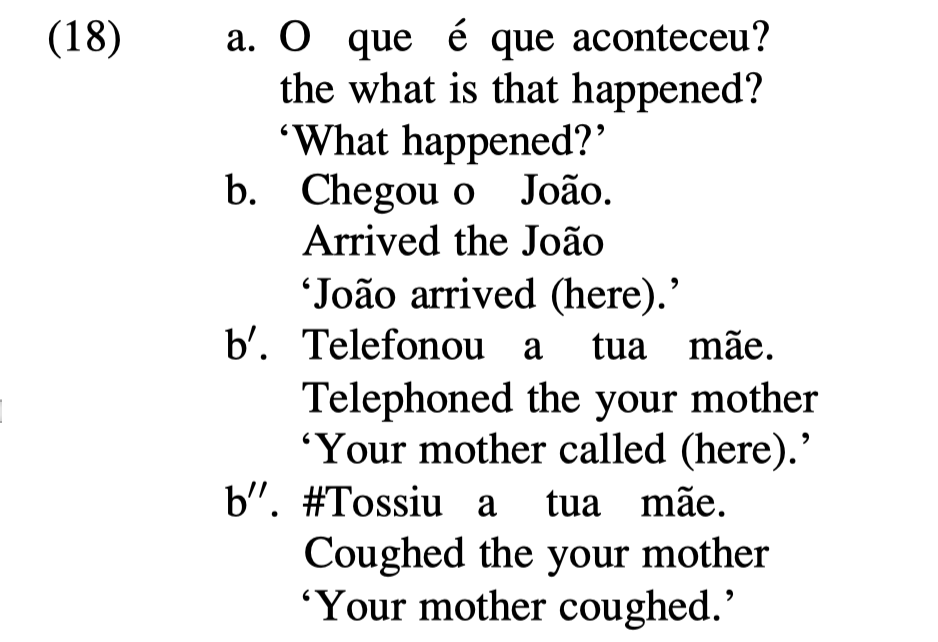 (Note also the obligatory locative/directional interpretation of VS with a definite post-verbal subject; compare (18b′) vs. (18b′′).)

What does all this have to do with null expletives? Well, following Pinto (1997), Sheehan takes the manifestation of the Definiteness Effect in these cases to indicate the presence of an expletive pronoun, which, given that it is nowhere to be found in the string, must be null.

At the risk of sounding like a broken record, this is just incorrect; the Definiteness Effect has nothing to do with expletives (overt or otherwise), and everything to do with subjects remaining low. Even in a language with overt expletives, whose occurrence gives rise to the Definiteness Effect as expected, the effect arises just the same if something else (other than the expletive) occupies the canonical subject position. Compare these Icelandic sentences:

(Data from Vangsnes 2002, “Icelandic Expletive Constructions and the Distribution of Subject Types.”)

So what does the Romance data show us? Here’s what it looks like to me: if you can ensure that the post-verbal subject is indeed low (as the V‑S‑PP word order allows you to do), you get the Definiteness Effect (see (27), above). If you cannot – i.e., if the data has at least one parse where the subject is not low – you don’t get the effect. And that is the case with a string that is ambiguous between run-of-the-mill VS and Locative Inversion (PP‑V‑S) with a null locative: it has at least one parse, the Locative Inversion one, where the subject is not low.

Note that I take Locative Inversion to involve the subject raising to its canonical “pre-verbal” position, followed by raising of the verb to an even higher position, with the locative situated in a left-peripheral position. The raising of the subject to canonical “pre-verbal” position could be optional in null-subject Romance languages; it wouldn’t change anything here. And finally, note that this high-subject analysis of Locative Inversion is not circularly motivated by my desire to undermine the argument for null expletives; it is required independently – given the fact that the Definiteness Effect has nothing to do with expletives – to explain why subjects in Locative Inversion constructions do not exhibit the Definiteness Effect.

Now, how does the subject get to stay low in, e.g., V‑S‑PP sentences? Here are two proposals (stop me if you’ve heard this before…):

And since expletives have nothing to do with the Definiteness Effect, option 1 and option 2 are extensionally equivalent. As far as I can see, then, there’s no argument for null expletives here (… or anywhere else).

Listemes and morphemes and other things (posted: Aug 7, 2019)